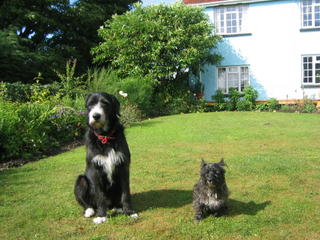 Something peculiar is happening to the food chain around here and it will probably require a conversation with neighbouring farmers in order to establish what is going on.

The thing is, we haven't seen a single fox since the ban on hunting with hounds came into effect and can only suppose that this means that foxes are being much more routinely shot, which of course also means that they many are being injured and are dying painfully slowly, often of starvation and surrounded by flies, with wounds infiltrated by maggots.

The fact that the mice, vole and mole population has exploded also seems to give the lie on the fox situation.

Our defences against rodents have effectively crumbled under the weight of this population explosion. Whilst the gentle and utterly useless giant wolf-hound cross was never up for the task, the killer cairn continues to do her best. It is quite hopeless though: the barns and stables are inundated with mice. Two springer spaniels visited today and we have subsquently found headless rodents deposited here and there. We may need their services again soon, or else must rely on a further upturn in the weasel and buzzard population.
Posted by Carlotta at 7:08 pm

It is all true. Have now spoken to 3 men from the area, all of whom are now shooting many more foxes and are also shooting the rabbits to keep their population down. This must be why we have only seen the upsurge in the small rodent population.

DSCF Position Statement re SEN and HE